Attack on Titan Season 3 has come to an end. Check out our episode guide for the season and more right here.

Attack on Titan Season 3 ended on a satisfactory high. Check out our reviews of every episode in the season  (synopses courtesy of Hulu). For updates on the fourth and final season,

“The Scouts take a stand against a new enemy, but it’s not just Titans they’ll be fighting anymore.”

“Historia and Erwin look back on their past, revealing a shady government with a hidden agenda and inspiration for an uprising.”

“On the run and running out of time, the Scouts must entrust their lives to others if they plan on surviving.”

“Erwin pleads his case for the Scouts to be spared, but an unforeseen announcement puts the fate of humanity at risk.”

“While sins of the past reveal new truths, both sides prepare for the upcoming showdown before they run out of time.”

“As battle breaks out to prevent the ritual, Historia makes a shocking decision which leads to catastrophe.”

Attack on Titan Season 3, Episode 8: Outside the Walls of Orvud District

“When everything falls apart, Eren must believe in himself to save his friends. But Eren alone may not be enough to stop the impending doom.”

Attack on Titan Season 3, Episode 9: Ruler of the Walls

“Desperate to stop the approaching monstrosity, the Scouts resort to unconventional tactics before it destroys everything in its path.”

“Kenny recalls the life which has brought him to death’s door, but he gets to decide whether to live on or not.”

“Having seen a glimpse of his father’s past, Eren attempts to track down a man who might shed some light on his father’s secrets.”

Attack on Titan Season 3, Episode 12: Night of the Battle to Retake the Wall

“The Scouts enjoy a feast before retaking Wall Maria. They’ll soon uncover what’s hidden within the basement, once and for all.”

Attack on Titan Season 3, Episode 13: The Town Where Everything Began

“The operation to retake Wall Maria commences in Shiganshina, the town where everything began. But when the Scouts arrive, something seems very wrong.”

“Against a rush of enemies, the Scouts scramble to defend their horses. But despite falling into a trap, they have their own surprise for the Armored Titan.”

“Though their Thunder Spears prove effective, the Scouts’ celebration is short-lived as disaster descends upon Shiganshina.”

While one front in the battle is rained on by flames, the other is battered by boulders. With no way out, the Scouts are forced to fight or die trying.

As Erwin’s heroic charge buys Levi time to confront the Beast Titan, Armin comes up with a plan of his own that lays it all on the line.

While picking up the pieces from the costly battle, tensions rise when deciding which of the wounded Scouts to use the single syringe on.

The secrets hidden in Grisha’s basement await in the ruins of Shiganshina. There, the Scouts hope to find answers to the world worth more than the price they paid.

A look into Grisha’s memories shows Eren the many secrets his father was hiding, including one which led to his mother’s demise.

Eren learns the truth about his Titan powers, his Father and himself. The Survey Corps have a meeting that discusses the future of Eldia with all their new information.

read our review of “The Attack Titan” here.

Attack on Titan Season 3, Episode 22: To the Other Side of the Wall

read our review of “To the Other Side of the Wall” here.

Here’s the official synopsis for season 3:

Eren Jaeger’s battle against the Titans rages on! After fighting the Female Titan, he has no time to rest as a hoard approaches Wall Rose. With his ferocious abilities and a new plan, Eren and his friends set out to face the Titans head-on. But as they prepare for war, they begin to unearth terrifying secrets. What are the Titans really and where do they get their power—and who’s really on their side?

As they begin investigating the danger hidden within the walls, a colossal reveal shakes them to the core! More Titan shifters are identified, and worse yet, a new Abnormal appears—the horrifying Beast Titan! Does humanity stand a chance at survival with no one to trust and a new evil on the horizon?

Check out the Toonami poster of their August premiere of season 3, featuring Levi Ackerman:

Here’s a look at this amazing season 3 poster, showcasing the main cast of characters: 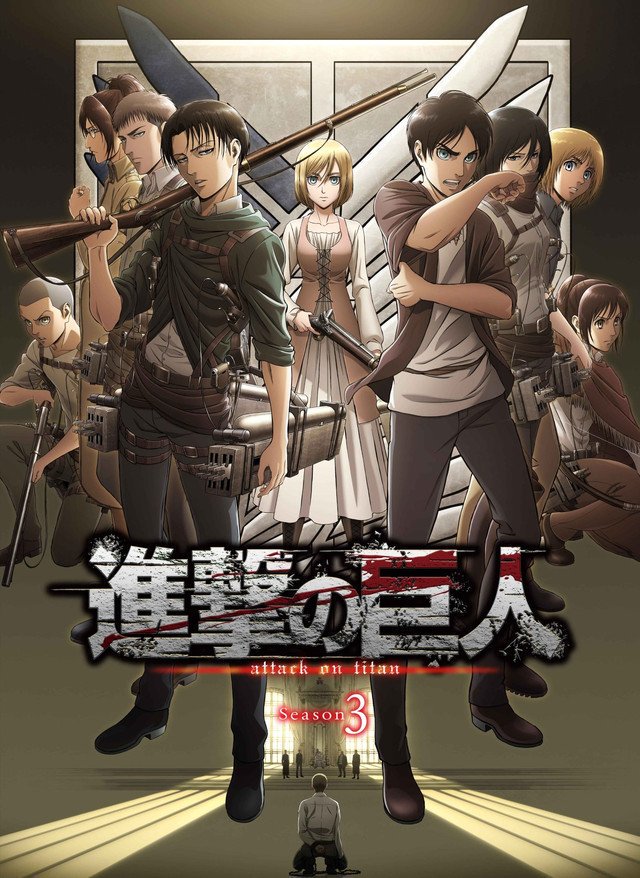 Check out this season 3 poster of our favorite pint-sized squad captain!

Here’s another season 3 poster, featuring fan favorite character Levi Ackerman and an old face from his past…

As well as the initial season 3 poster….

Housefull 4: Akshay Kumar, Kriti Sanon starrer leaked online by Tamilrockers within a day of its releas

Housefull 4: Akshay Kumar, Kriti Sanon starrer leaked online by Tamilrockers within a day of its release